Assalaam-u-alaikum! Here is a step by step guide for performing Hajj and ‘Umrah demonstrated by Umm Jamal and Abbu Jamal.

Hope you and your family find it useful & enjoy the activities too!

An Overview of ‘Umrah

As we all know, Hajj is performed in the month of Dhul Hijjah! The 12th month of the Hijri Calendar. Before performing the Hajj, most people also perform the ‘Umrah, or lesser Hajj. ‘Umrah can be performed any time of the year. Here is an overview of the different activities we do in ‘Umrah. 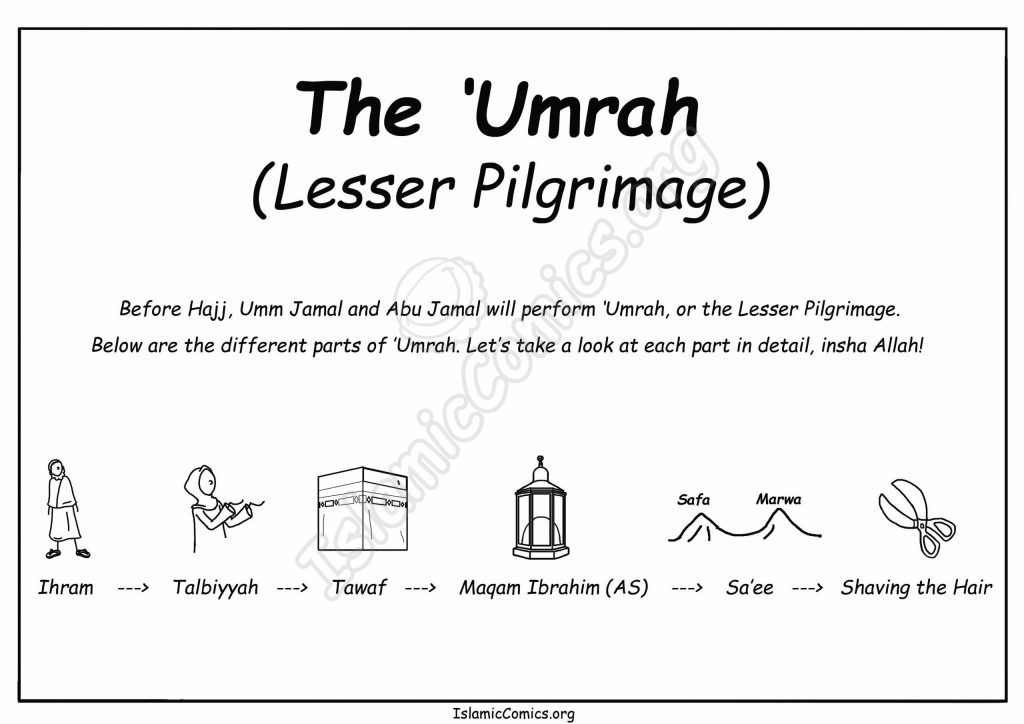 Before performing ‘umrah or the hajj, a pilgrim must enter the state of ‘ihram‘. Here are two helpful coloring pages to help you understand what is ihram, how you enter Ihram, as well as what is permissible and what is not permissible during ihram. Enjoy! 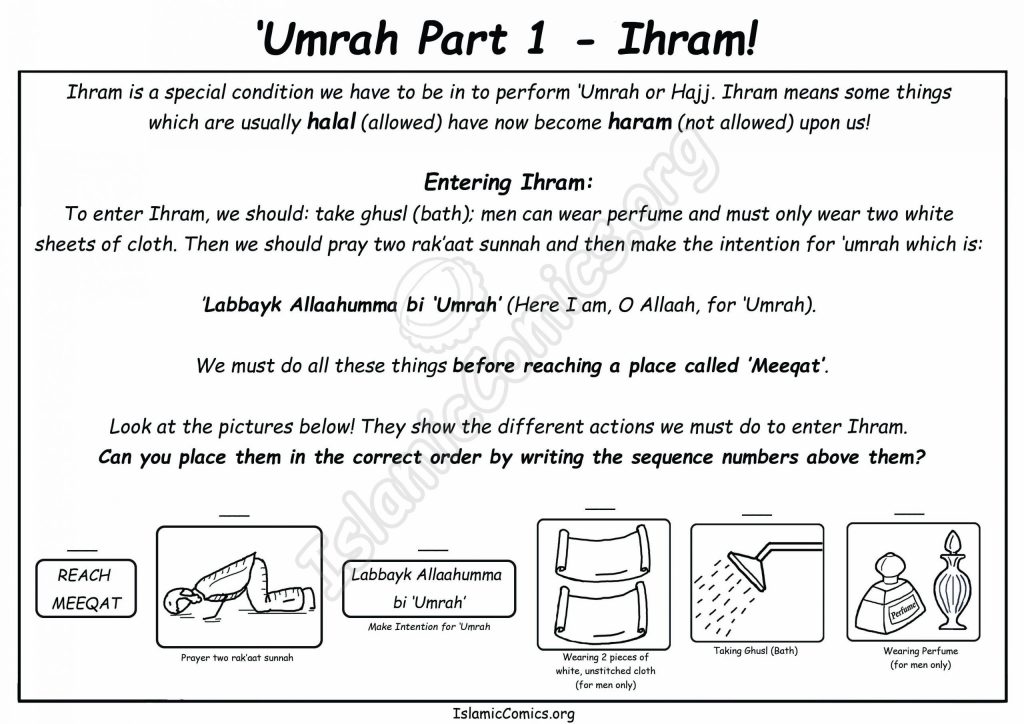 After entering the state of Ihram, you should start reciting the Talbiyyah all the way till you reach the Ka’ba for Tawaf! 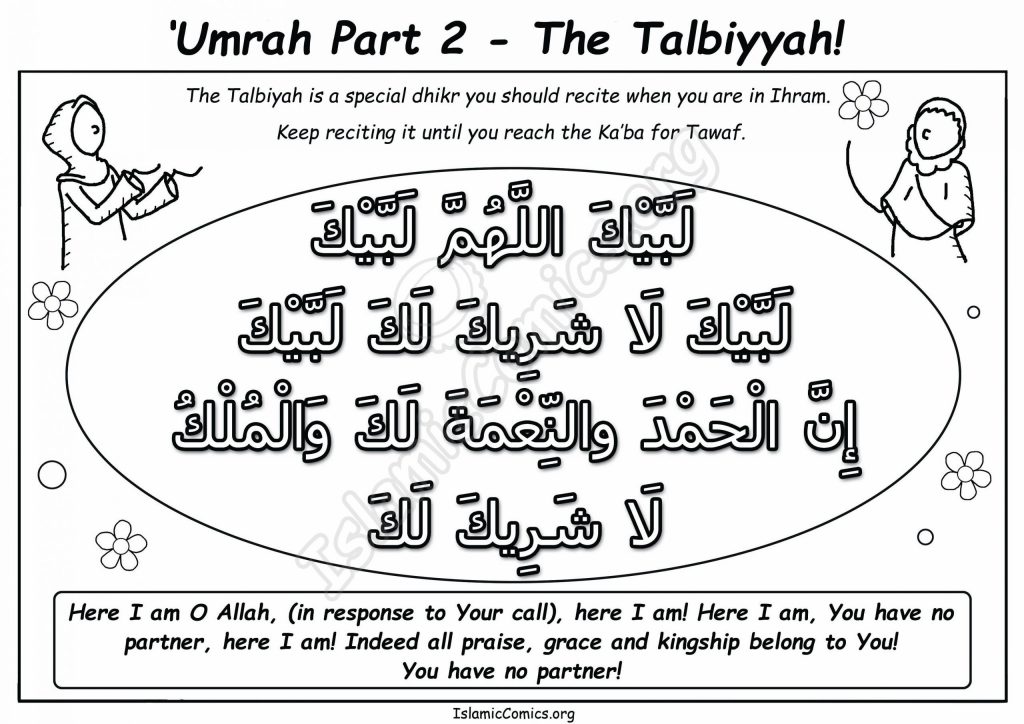 Once we reach the Ka’bah we perform the Tawaf which means going around the Ka’bah 7 times while praising Allah. Can you spot the difference between the two pictures? 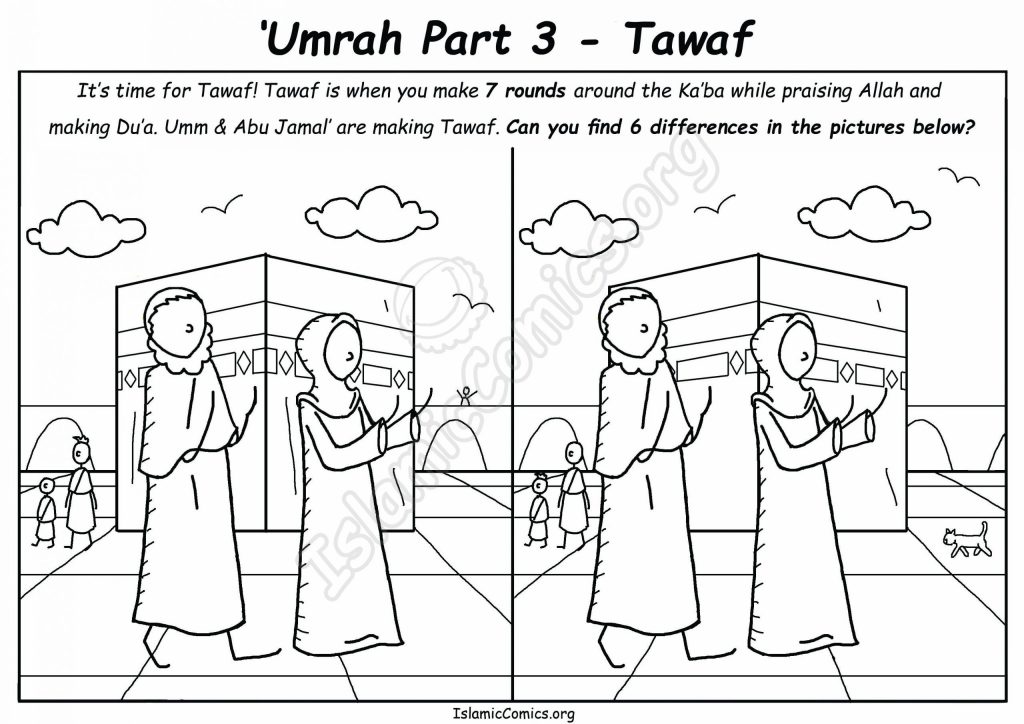 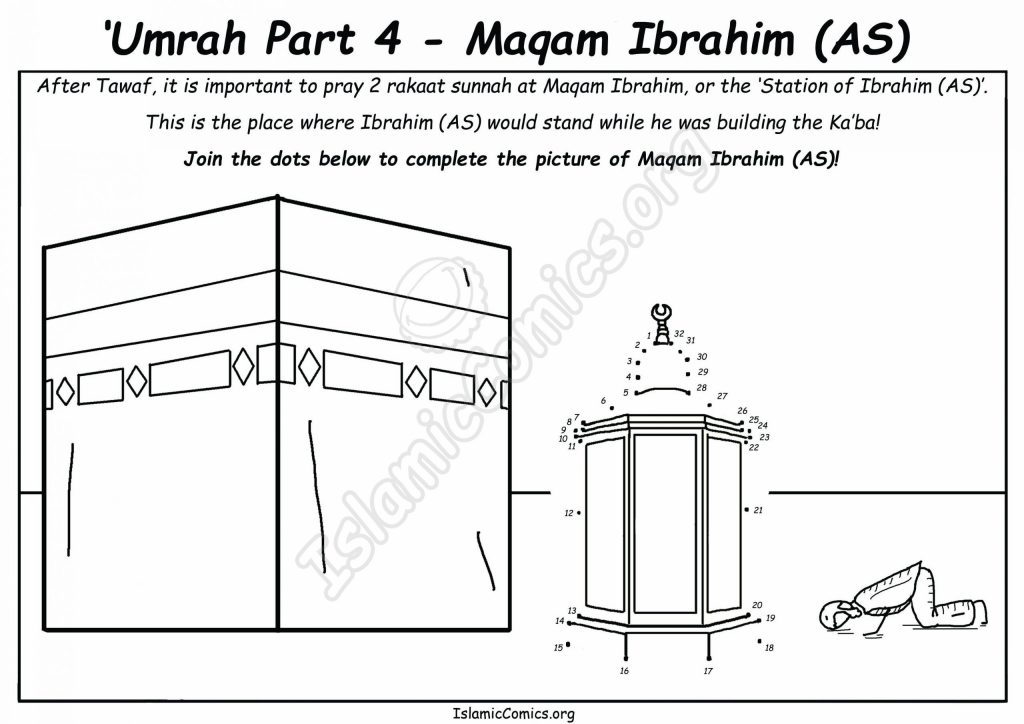 We have almost completed ‘Umrah. The next step is to do the sa’ee (the quick walking) and running between the mountains of Safaa and Marwa! Can you find Umm Jamal & Abbu Jamal in the picture below? 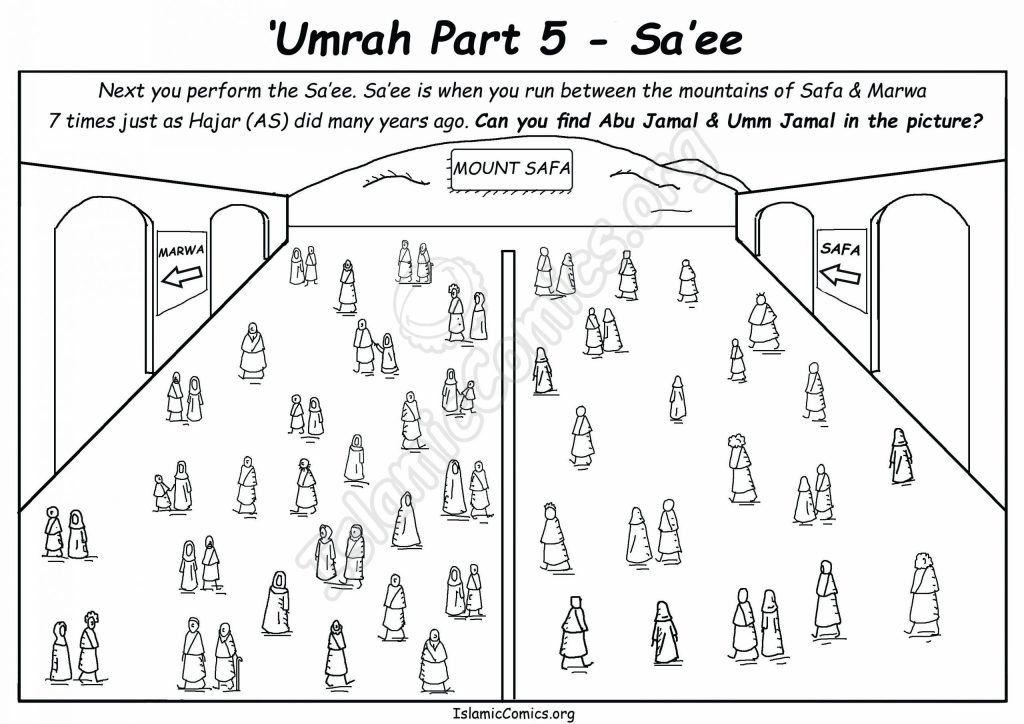 The last step of ‘Umrah is to cut our hair and then we come out of the state of ihram. Color in this picture! 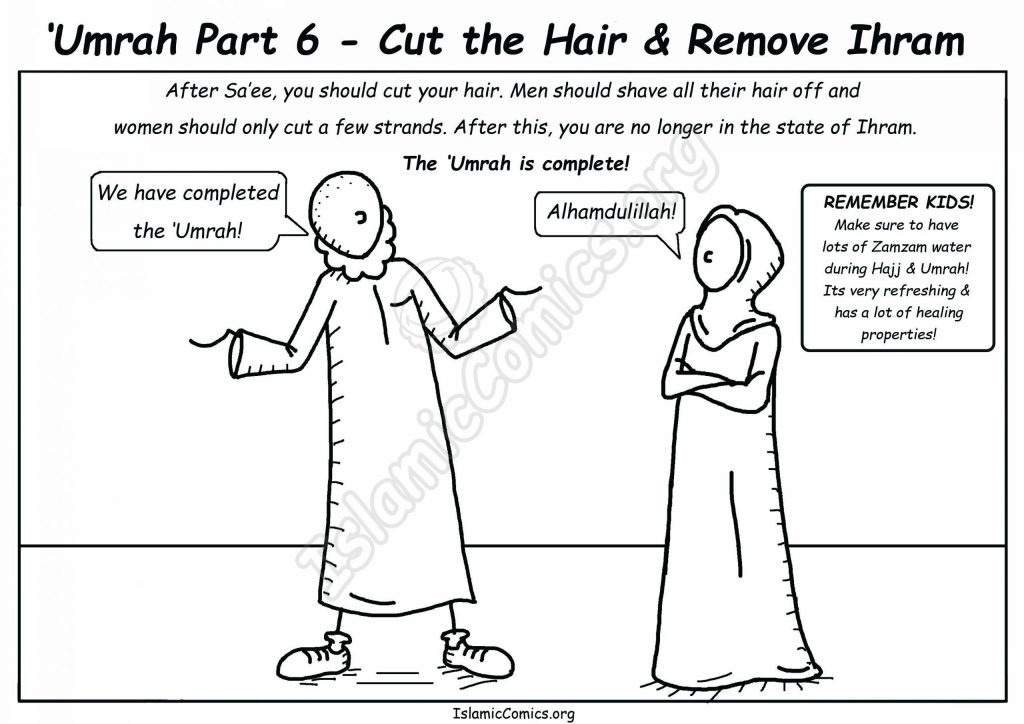 The Hajj – An Overview

After ‘Umrah, Umm Jamal and Abbu Jamal begin their Hajj!  Hajj begins on the 8th of Dhul Hijjah. Below is an overview of all the activities Muslims do on the Hajj. 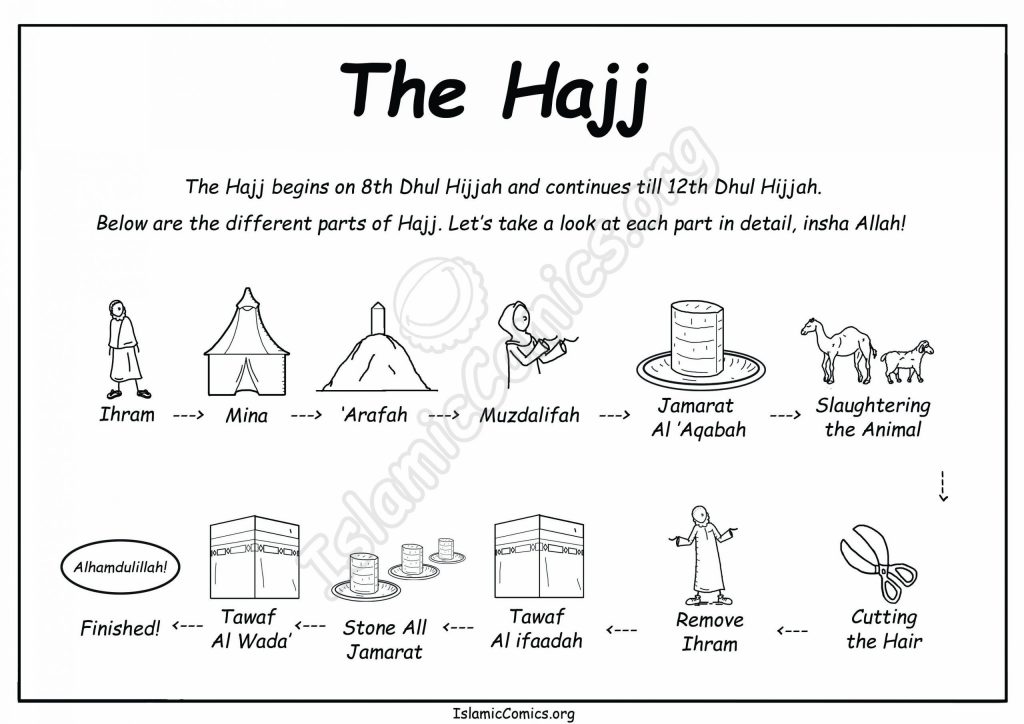 On the first day of Hajj, we again enter Ihram and go to Mina where we will sleep in tents. But where is Umm Jamal’s tent? 🙂 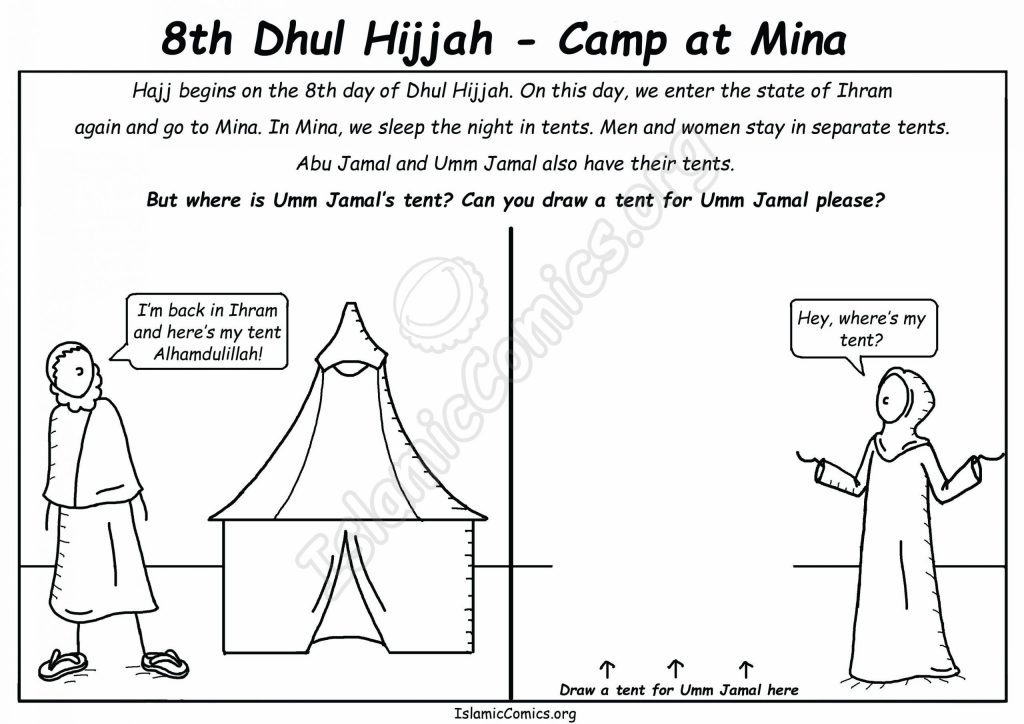 9th Dhul Hijjah is Yaum ul ‘Arafah, the GREATEST day of the entire year! On this day the people performing Hajj gather on the Mount of ‘Arafah. Afterwards they head to Muzdalifah!

Draw Umm Jamal & Abbu Jamal on Mount ‘Arafah and help them find the stones at Muzdalifa. 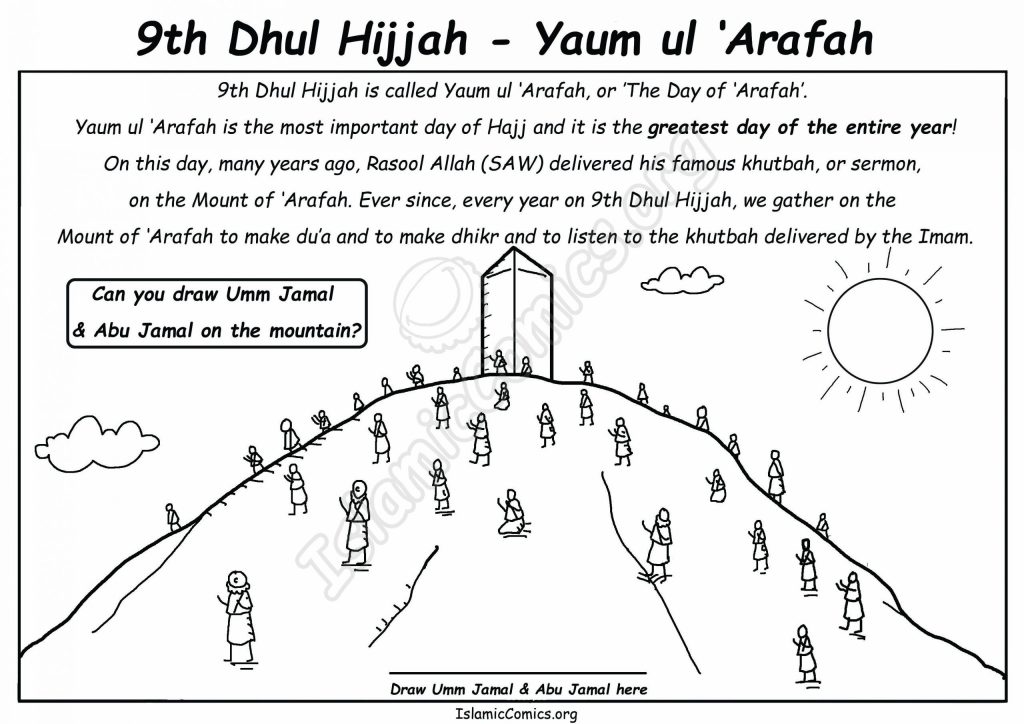 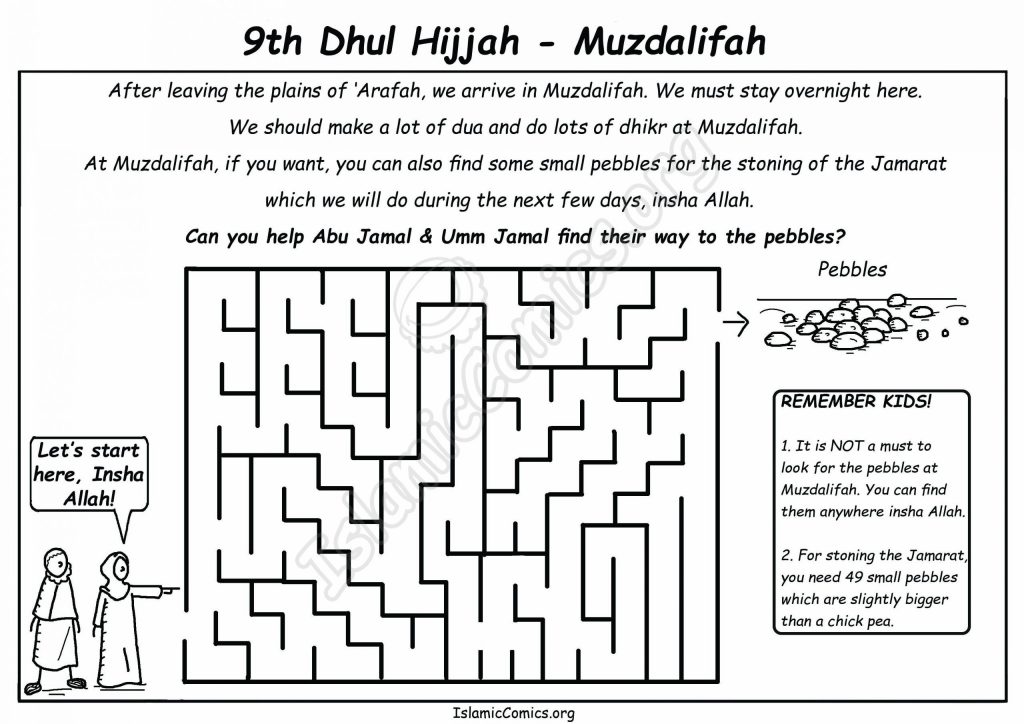 10th Dhul Hijjah is day of ‘Eid ul Adha for Muslims worldwide! On this day, the people performing Hajj travel back to Mina to do the following:

Color in the activity sheets below showing these acts! 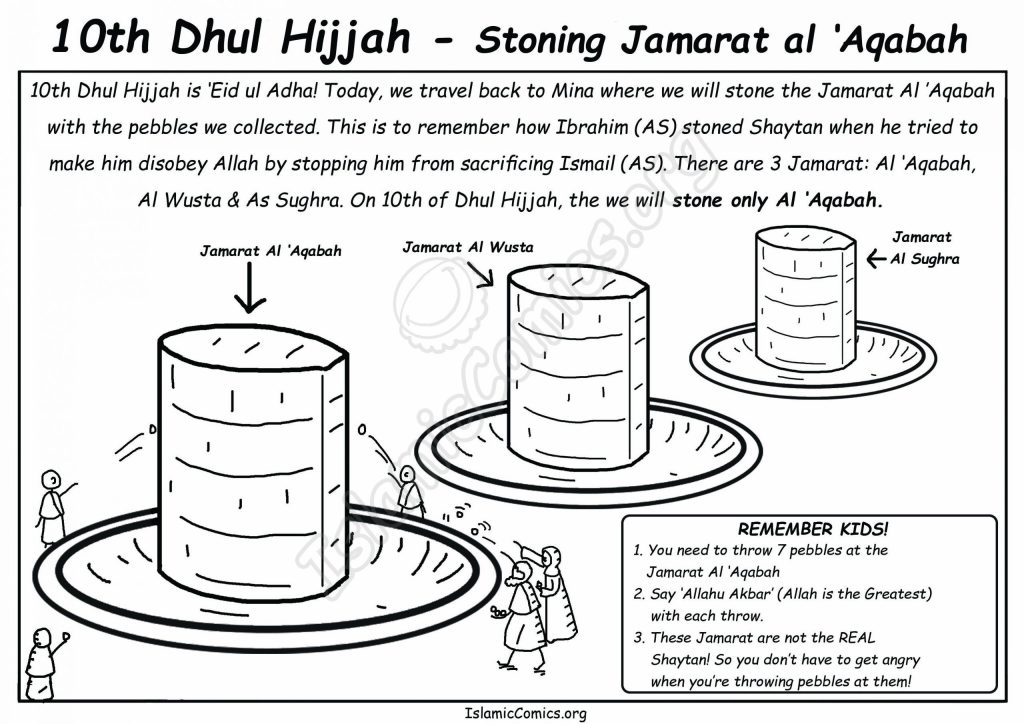 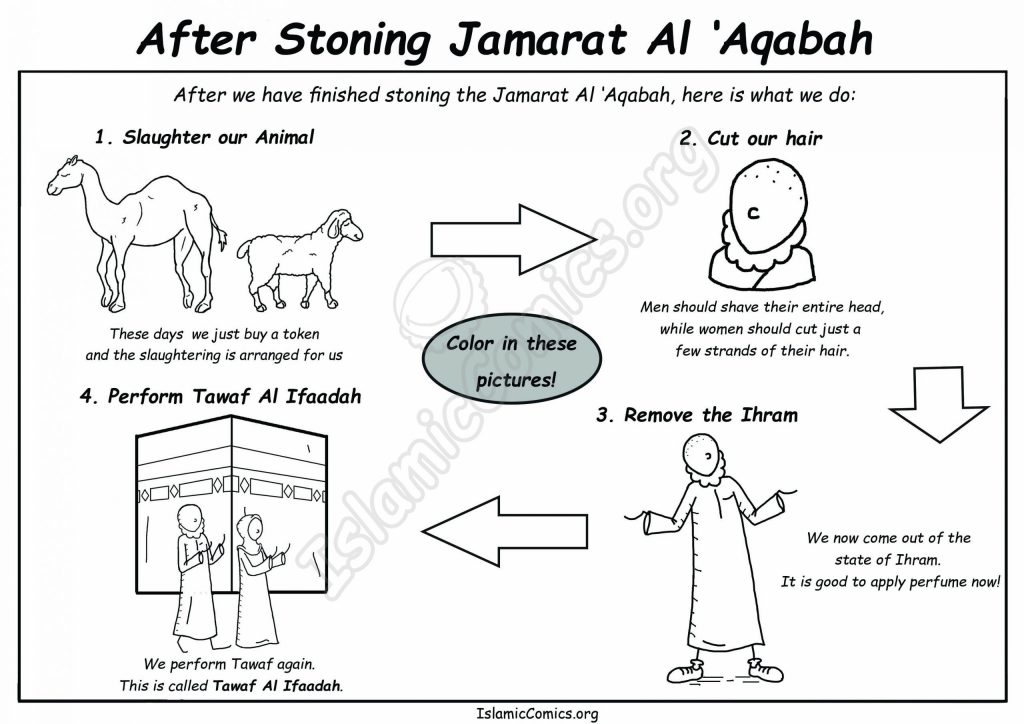 These are the very last days of Hajj! On these days, the people performing Hajj:

Can you draw in the missing Jamarat in the picture below and also draw Umm Jamal and Abbu Jamal performing Tawaf al Wada’? 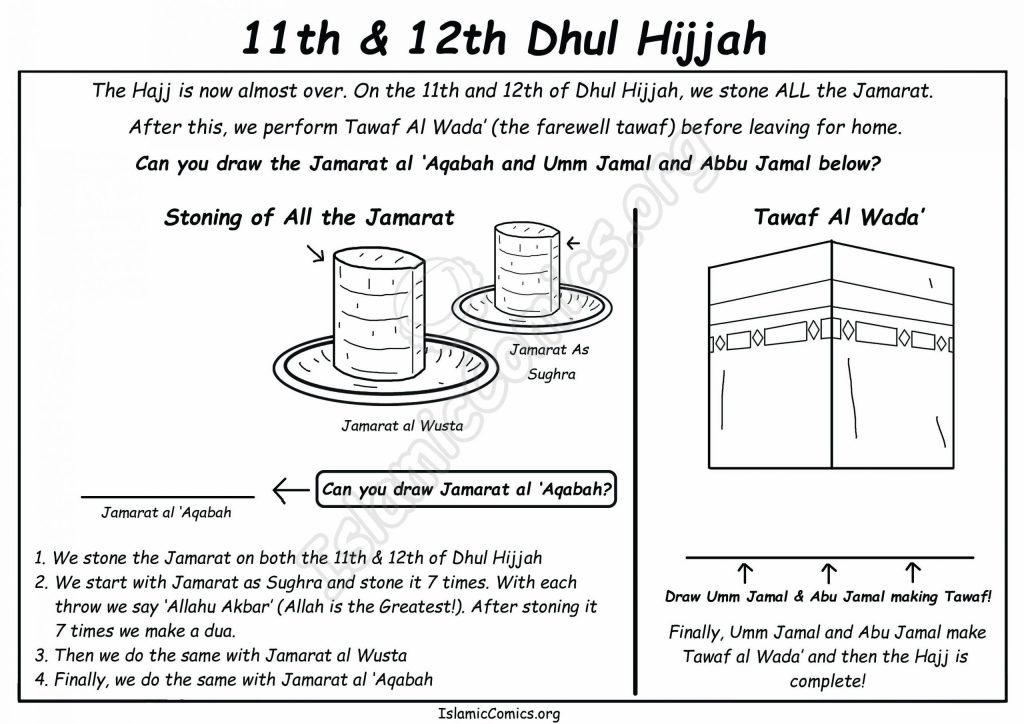 Alhamdulillah!  All praise is due to Allah who helped us complete the Hajj!

May He allow us to come back again and again to perform this great act of worship! Ameen!